Tokyo-based ALE Co. Ltd. (ALE), led by CEO Lena Okajima, has announced the official launch of its new corporate branding, redesigned website along with its newly created corporate and service slogans, statements and visuals. With its company vision to “anchor space into our culture to empower humankind to new endeavors” and mission to “make space closer, for all of us, together”, the rebranding is aimed to strengthen the brand image.

Now in its 10th year since the company was established, ALE has developed two fields of business: the unprecedented “space entertainment”, such as man-made shooting stars, that aimed to sparks people’s curiosity and the “accumulation and utilization of middle atmospheric data” which will enable to help characterize the mechanisms behind climate change on Earth. ALE aspires to contribute towards the sustainable development of humankind through “entertainment” and “scientific” approaches.

Some people feel that it takes a rocket scientist to understand space and science, and that they do not have a direct impact on our daily lives. However, ALE believes that “space is filled with immeasurable amounts of scientific knowledge that can help humanity maintain sustainable life on earth”. For its clients and consumers to better understand its corporate philosophy, culture, and activities, ALE redesigned its brand elements. The newly created brand elements have a look and feel that helps a wide range of audience enjoy the beauty of space and stimulate interest towards science, which will further ALE a step closer to accomplish its mission.

■ Corporate Statement and Visual
Using a pinball machine as a visual motif, ALE aims to express its “serious” and “playful” sides while sparking the interests of people who are not familiar with space. The pinball machine signifies that the “blue sphere” which is the symbol of ALE bounces back and forth between Earth and space while creating various positive effects.

Exploring the Blue
A youthful curiosity that leads us far into the blue and beyond in bold pursuit of our passions.
A pioneering mindset that sees the deep blue ocean of outer space as part of our culture.
An unwavering vision of our earth as a pale blue dot among countless stars.
This is what “blue” means to us.

With our development of man-made shooting stars and the science behind it,
we want to inspire and share the idea that the future is ours to create.
Our adventurous spirit thrives on exploring the unknown
and pushes us to take a bold step toward that future.

By sparking the curiosity of people with our world-first space entertainment business
and gathering middle atmosphere data that will help shed light on climate change,
we contribute to the sustainable progress of science and humankind.

Philosophy of BLUE
■Far into the BLUE
A youthful curiosity that leads us far into the blue and beyond in bold pursuit of our passions.
Since ALE’s establishment in 2011, this has been our driving force. We believe that curiosity fuels the progress and evolution of humankind. In all we do, we hold firmly to this unchanging belief and embrace the unknown alongside our fellow adventurers.

■Space as a BLUE ocean
A pioneering mindset that sees the deep blue ocean of outer space as part of our culture.
At ALE, this way of thinking sparks passion within us, pushing people out further into the world. We believe that individuals can change the future. We want to help people truly understand this and work with them to forge a new path for humankind.

■Earth as a pale BLUE dot
An unwavering vision of our earth as a pale blue dot among countless stars.
This vision reveals two things: humility at the realization of humankind’s insignificance, and a belief in its endless potential, which sparks an eagerness to tackle new challenges. By holding fast to both, ALE is contributing to the sustainable development of both science and humanity.

■Corporate Logo (*Refined)
The new refined ALE logo signifies “A”, the first letter of ALE and in the memory of Leonid meteor showers (four especially bright stars). ALE’s CEO Okajima came upon an idea of a man-made shooting star when she saw Leonid meteor showers in her college days. The logo serves as a reminder that ALE should never forget the curiosity that started the company and the curiosity that drives us to be better every day, which pushes ALE and its staff to keep evolving with a pioneering mindset. 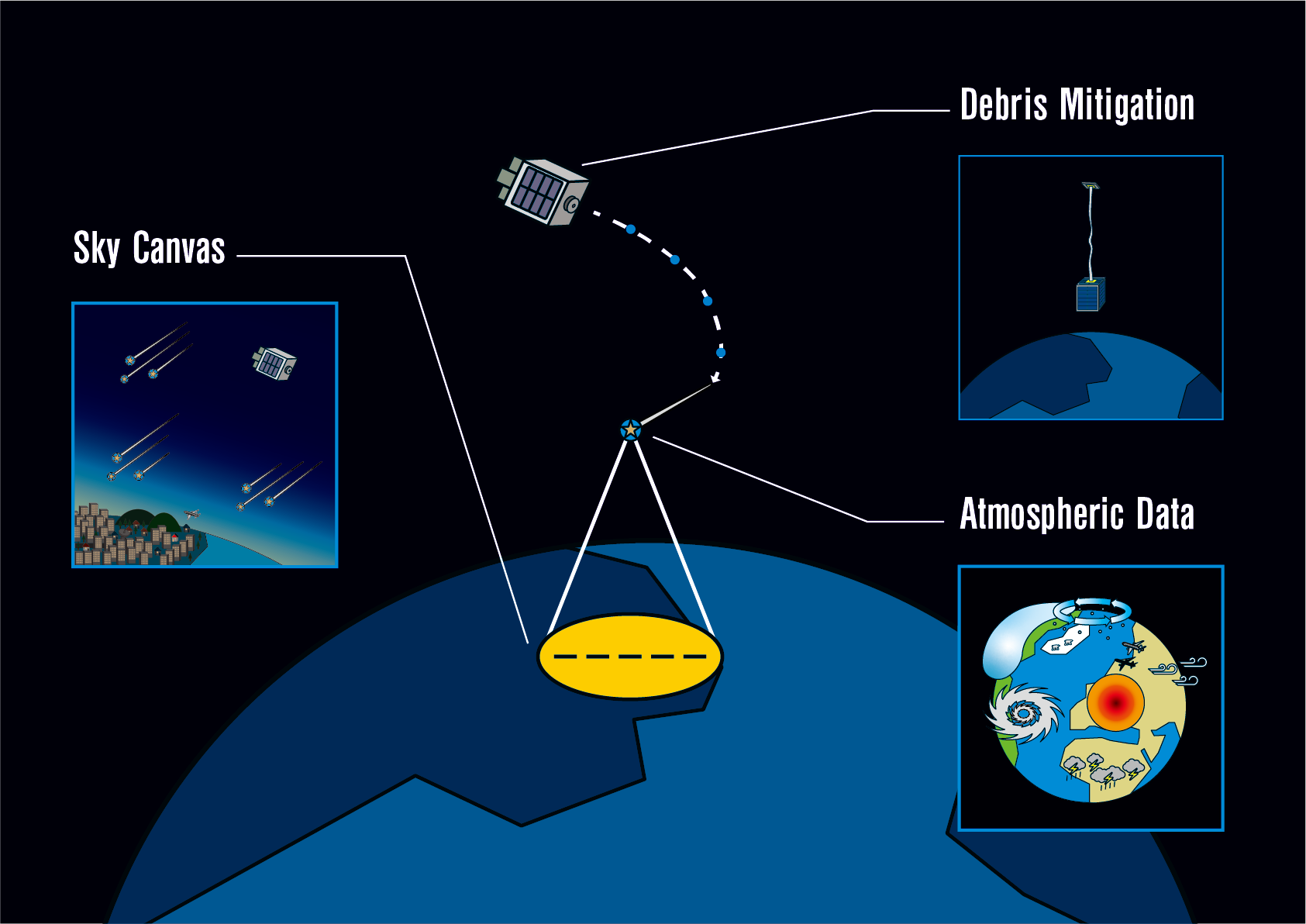 ■Space entertainment business “Sky Canvas” statement and visuals
Sky Canvas is a new kind of entertainment, transforming the night sky into a platform using a man-made shooting star for people to simultaneously enjoy the stunning celestial experience of space. With its third satellite, ALE aims to make this project come into reality. This unprecedented scale of new entertainment is available around the world above land and sea. ALE's challenge does not stop with the man-made shooting stars and is in development of other types of new entertainment content. This man-made shooting star initiative aims to spark people's curiosity and interest towards space and to also help collect atmospheric data to study and derive clues to understand the mysteries of climate change on Earth.
* Permits and approval will be needed from designated local authorities and necessary government and non-governmental entities. It may not be available in certain areas, due to satellite orbit. Painting the sky with the science of shooting stars.
By transforming the night sky into a showcase for man-made shooting stars,
Sky Canvas offers entertainment on an unprecedented scale.
Using a proprietary technology that enables satellites to create shooting stars,
people over a wide area can marvel at a stunning sight at the same time.
But Sky Canvas is more than just entertainment.
A starry sky inspires wonder, which sparks scientific curiosity,
the driving force behind humanity’s progress.
The data obtained from studying the path and light emission of shooting stars also helps shed light on the mechanisms of climate change.

Born of a meteor shower, this initiative not only helps advance
scientific knowledge but also makes space closer for all of humankind.


■Atmospheric data statement and visual
By using its original man-made shooting stars, small satellites and plasma technologies, ALE is developing new ways to observe Earth. By studying the path and light emission of man-made shooting stars, ALE aims to increase the pace of obtaining data from the middle atmosphere that has been challenging in the past. This will enable ALE to contribute in the improvement of weather forecast accuracy and help characterize the mechanisms behind climate change. Subsequently, these data and analysis can help in areas such as disasters countermeasures, energy and agriculture production and logistics. 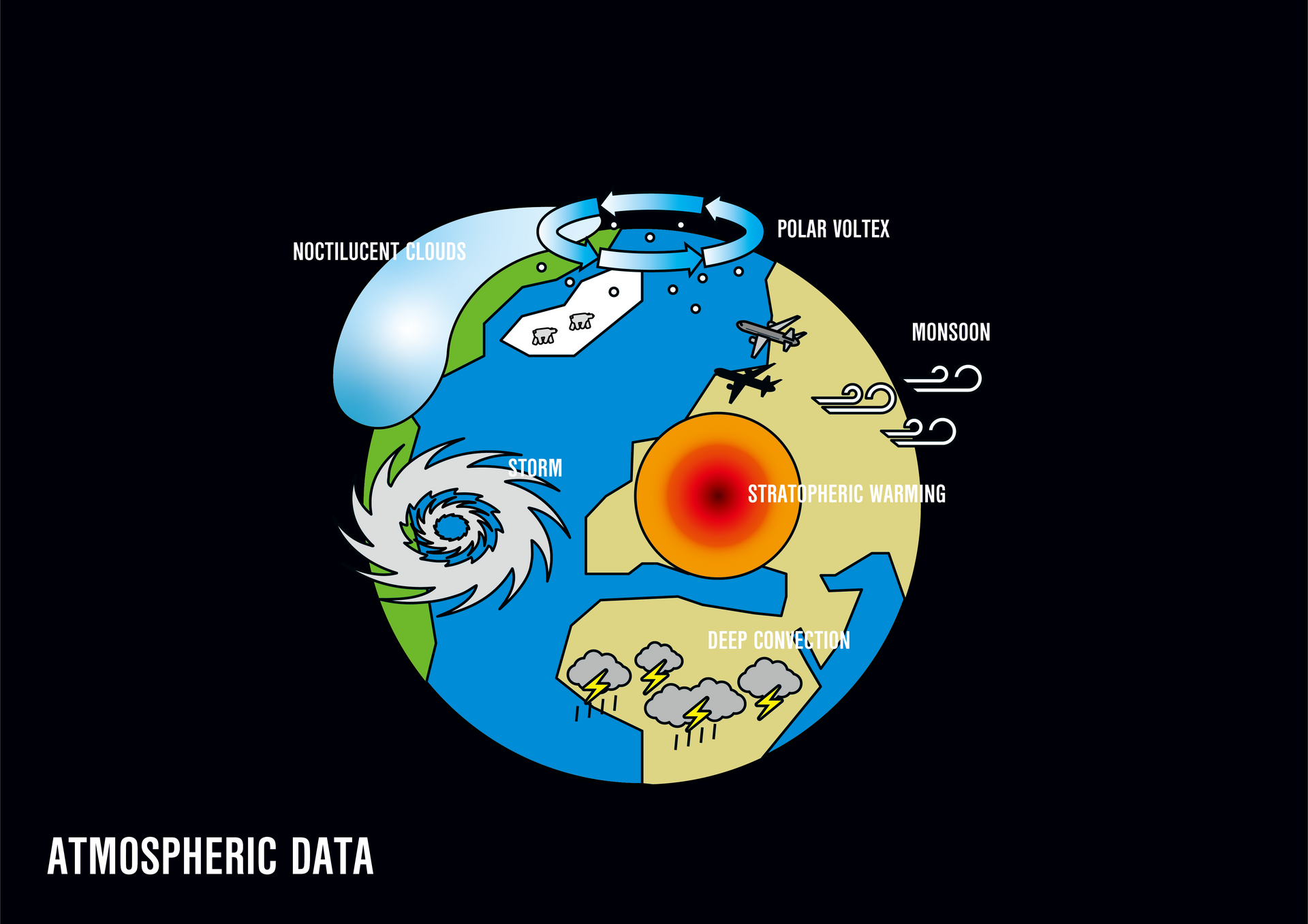 Unraveling Earth’s mysteries with the science of shooting stars.
By studying the path and light emission of shooting stars,
we aim to unravel the mysteries of the middle atmosphere.
Based on over half a century of satellite-based weather forecast history,
we aim to explore new methods to observe Earth.
Leveraging our man-made shooting stars, small satellite, and plasma technology,
ALE aspires to speed up the acquisition of Earth’s weather data.
By shedding light on the mechanisms of climate change,
we hope to advance scientific knowledge and help create a sustainable world for humankind.

■（For reference）Small satellite research & development
Today's active space developments are increasing the number of objects in outer space. It is said that in the near future, these objects will collide with one another and cause a cascade that increases the probability of further collisions, resulting in more space debris. ALE, together with JAXA (Japan Aerospace Exploration Agency) has developed a space debris prevention component utilizing EDT(ElectroDynamic Tether), enabling prompt deorbit of satellites after the completion of their mission (Post-Mission Disposal, PMD).